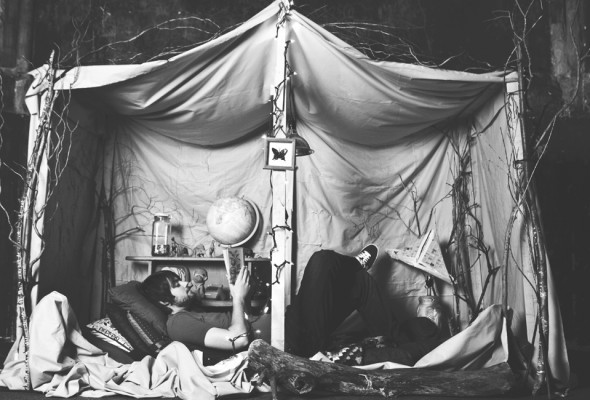 Andrew Austin might be the most listened to musician in Canada you’ve never heard of. But that’s all about to change.

The Toronto-by-way-of-Sarnia, singer-songwriter’s work has been featured on television shows, in films and in commercials but it’s the personal tales on his debut full length album While It’s Still Light Out that stand to gain Austin the most notice. Threading a line between Paul Simon’s understated folk and Patrick Watson’s soaring adventures, there’s a magnetic feeling of urgency to the 12 songs on ‘While It’s Still Light Out’. Andrew’s songs tell sweet stories of love, life and unrealized potential interspersed with the idea of not leaving things undone or unsaid.

“I wanted to express ideas for people who may have difficulty expressing themselves.”
Austin enlisted some high powered help to properly express himself on While It’s Still Light Out, namely marquee producer Dave Newfeld (BrokenSocial Scene, Super Furry Animals, Apostle Of Hustle). “He has such a great encyclopedic knowledge of pop music while being extremely creative and having a high standard of what a song should be. So he has a way of helping a song become really beautiful but exciting at the same time.” Newfeld and Austin recorded While It’s Still Light Out over the past year at Newfeld’s Dobbstown Haunted Church Studio, situated East of Toronto with Austin, at one point, living out of the adjoining Priest’s House.

Newfeld and Austin constantly challenged each other to improve the songs.
“I spoke to many producers who were flattering about demos I would show them” says Austin. “When I brought songs to Dave his reaction was less enthusiastic saying ‘I like your voice, but these songs are just ok.’ I remember him talking about needing to compete with more successful artists; your favourite artists. I knew he was right and we had to make the songs better.”
“And so we tried to maintain a higher standard.”

And it’s no surprise that television shows would line up to license Austin’s evocative, cinematic songs. The dramatic tale of young love that is “Inside Out” and the haunting “Sending Out A Message” will be featured in television shows in the coming year. Austin’s colourful career includes stints in a Beatles tribute act, being the bandleader for Andy Kim, a run on a music reality TV show as well as being the voice behind a rather ubiquitous Tim Horton’s campaign. “At this point nobody knows that I am the Tim Horton’s ‘Time For Tim’s’ guy. I wrote that, I sing that.”

Along with touring, Austin believes that getting his songs exposure on television and in films is yet another way to reach people and turn them on to his music. Recently a song he co wrote and performed for an Alexander Keith’s beer ad recently charted in the iTunes Top 10 in Canada and has achieved over 100,000 hits and counting on You Tube.

Certainly there are an endless number of scenes and shows that would work perfectly with the Moody Blues-feeling “Thousand Eyelids,” the narrative tale “To Love Like This Again” the romantic “Beautiful Bones” or the reflective “If It Ain’t This Town” one of those memorable tunes that takes a melancholy look back at Sarnia, Andrew’s hometown.

In the grand scheme of things, it’s all about just doing it for Austin. To go for it now… while it’s still light… to make music and get it heard. And considering how good he actually is at doing this, it’s just a matter of time before everyone knows who he is.