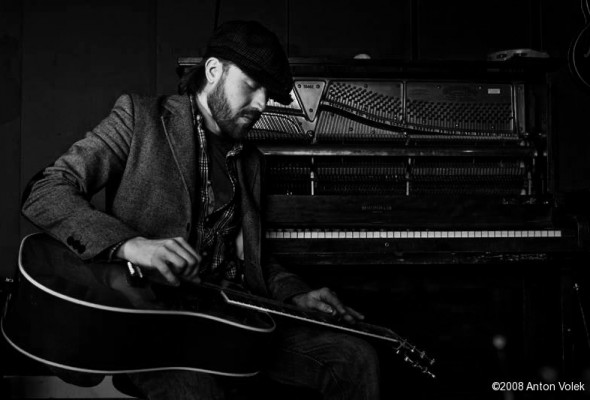 The story-telling Folklore artist, Sean Pinchin, is best known for crafting warm and soulful sounds with nothing but his voice, harmonica and slide guitar. Using his music as therapy, every performance has an emotional delivery that any audience can feel and relate to.

Born in Etobicoke in 1981 and raised in Mississauga, virtuoso finger style, slide guitarist Sean Pinchin began his musical journey as any other teen in the 90’s; listening to grunge and alternative rock. It was only when Nirvana’s Unplugged album surfaced that Sean really picked up his guitar. Playing along and replicating Nirvana, Sean became very engaged in his guitar, so much so, that not even school could stop him from practicing.

The youngest of three and the son of hardworking, blue-collar parents, Sean often practiced alone, as no one really expected Sean’s hobby to flourish. However, music was all that interested Sean; particularly the organic vocal sounds of slide. In search of artists that played slide guitar, Sean stumbled upon the legendary, smooth sounding Robert Johnson. Flipping Sean’s musical world upside down, Robert Johnson led Sean down a path he did not understand, but was eager and dedicated to learn.

Torn between the alternative rock he knew so well and the blues he had fallen in love with, Sean began writing his own music. Sean ventured in and out of five bands throughout his late teens and early twenties as a lead guitarist. Always avoiding singing, it was not until the vocalist in his band lost his voice that Sean was forced to sing. Opening new doors, Sean began occasionally singing. When the band fell apart, Sean was hitting jam nights across the city almost six nights a week. Praised as ‘fender boy’, Sean cultivated a following for his skillful guitar stylings. However, it took the right people to tell Sean that if he was going to make it as a solo musician, he needed to sing.

It was not until a colleague passed along Lead Me On, the debut album of Kelly Joe Phelps, that Sean found his true calling; lap style and finger style acoustic guitar!

Practically locking himself in a room to practice and write, Sean spent several years perfecting his technique and creating his first album, Folklore (2007). An encyclopedia of Sean’s past, Folklore was Sean’s first step towards getting his music out there.

Full of conviction, like many of Sean’s influences, In Transit (2008) Sean’s follow up album to Folklore, answers his question of “Can I be a singer/songwriter, more than just a guitarist?” Honest and soul-stirring, In Transit is a great paradigm of just what Sean Pinchin can do.

It is his goal as a musician to become part of the culture, a part of the heart beat, rather than just a sugar rush of popularity that drives Sean to reach his peaks musically and inspire others to do it their way, as he has.

Now a resident of Port Credit, Sean continues to develop as an artist, constantly creating and pushing the envelope of his abilities. Live performances by Sean Pinchin are full of soul and artistry that both soothe and wow audiences across Southern Ontario.

Sean Pinchin is a one-of-a-kind artist that is sure to continue to capture people’s attention for years to come.